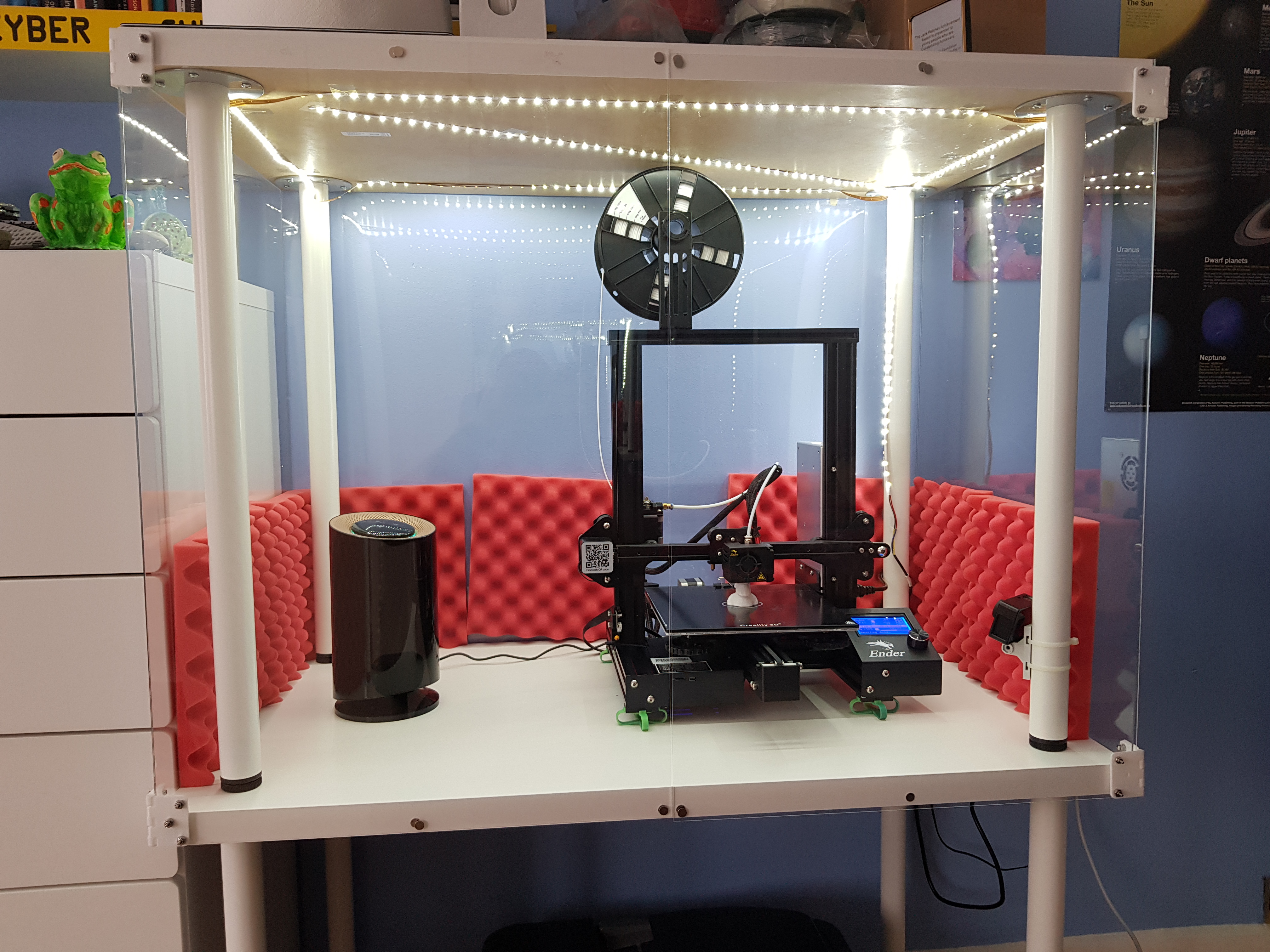 I just finished building my very own 3D Printer enclosure for the Creality Ender 3 Pro. I started out with a couple ideas of buying another table so that I could have it in my room, but thought about noise problems of having a 3D Printer whining whilst I stressed about A-level revision. I needed to find a way to dampen the noise, so I did some research and found others who had bought two Ikea tables and sandwiched the 3D printer with some plastic sheets for noise reduction. So, I had now bought two LINNMON IKEA tables which I sandwiched the printer with. 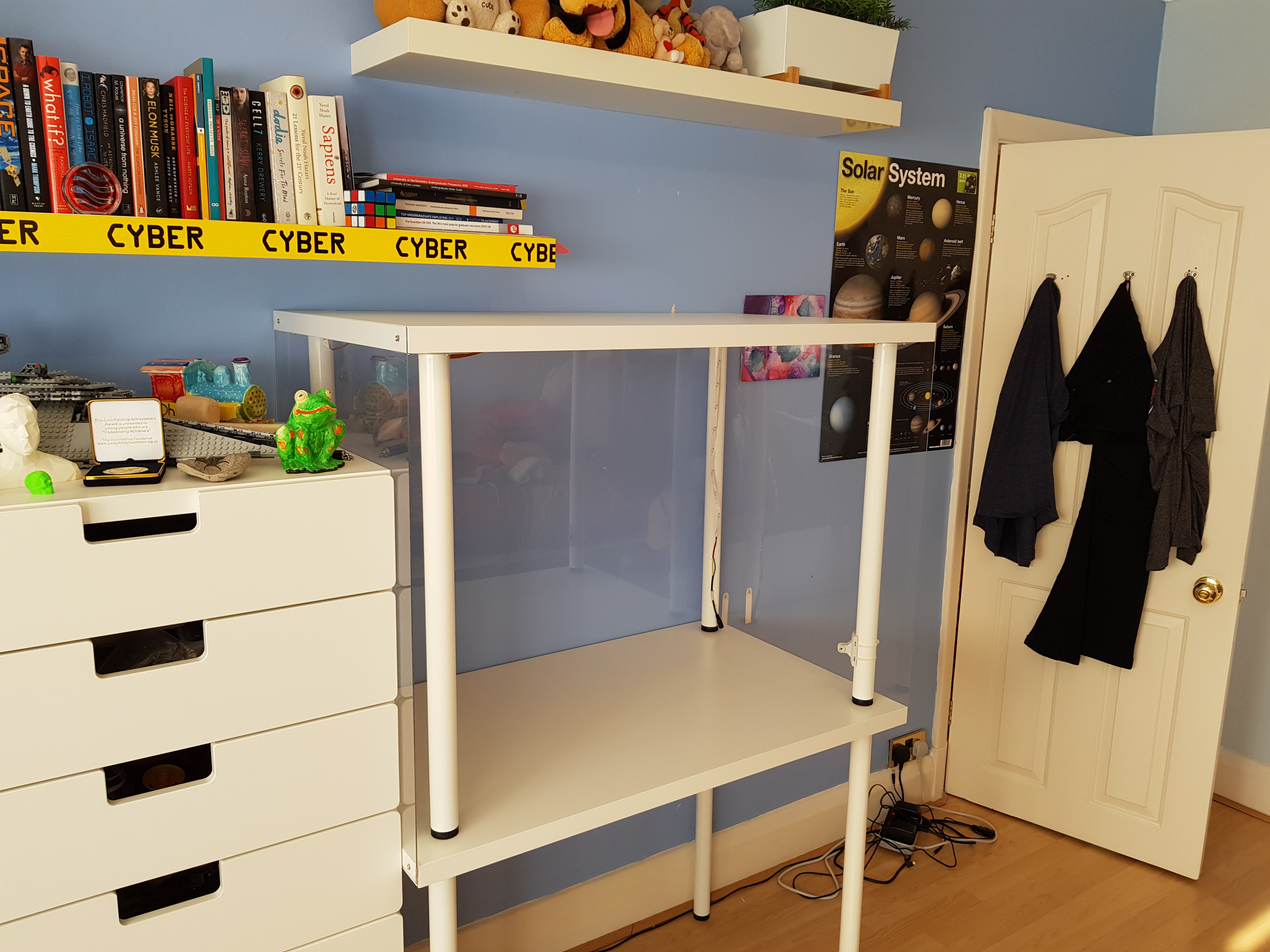 It was a pretty neat setup and the white tables matched all of the other IKEA products, which helped to blend the 3D Printer in to fitted cupboards. There was still lots of noise because I forgot to buy the plastic sheets to cover the sides, I remembered that cutting acrylic is hard enough due to its fragility, so I wanted the cutting processes to be handled out-house. Using these manufacturers, I was able to order acrylic that was cut to size for my table, I ordered five sheets, three stationary sheets that would be attached to the sides and back and a further two for the doors on the front. 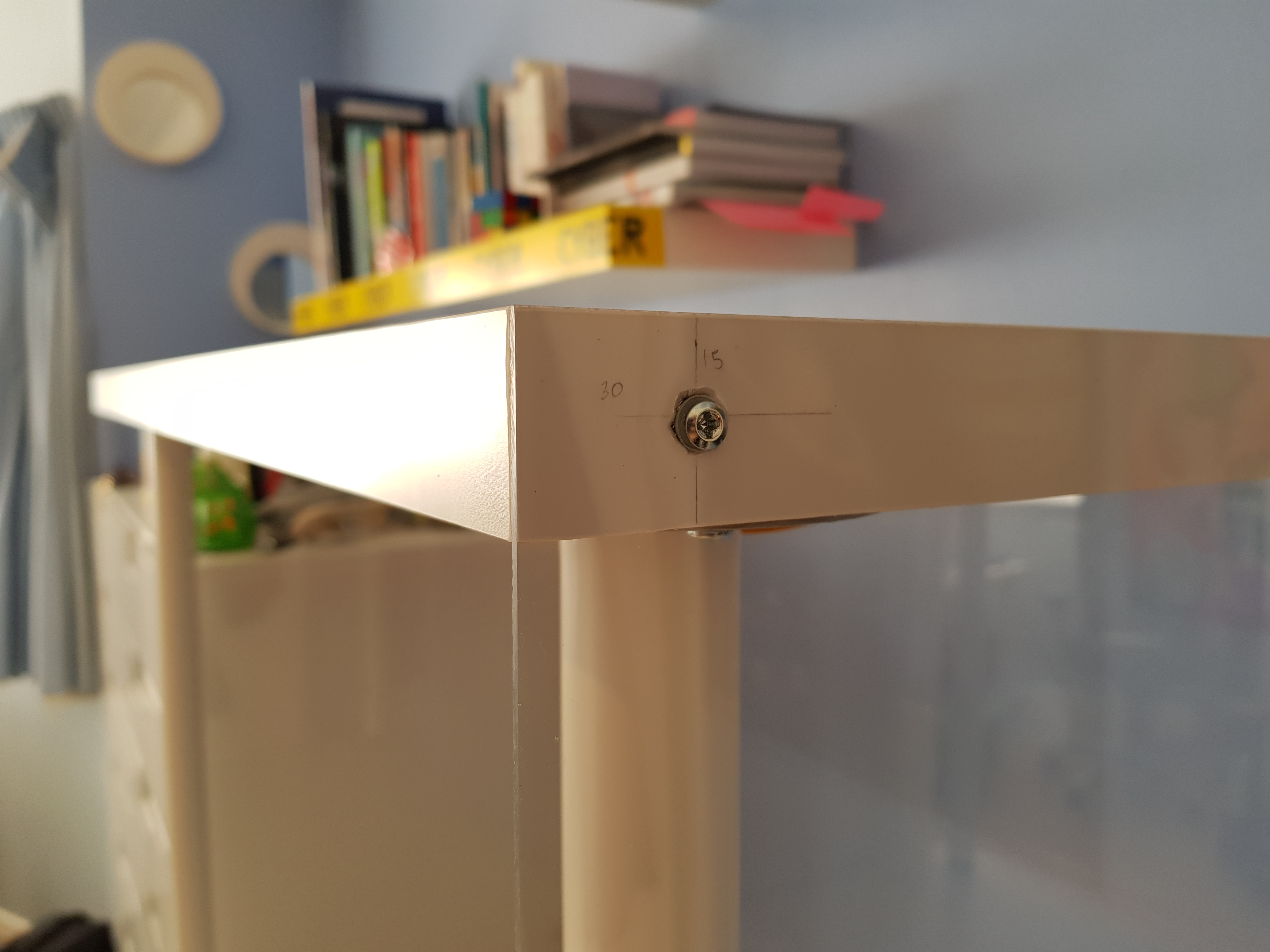 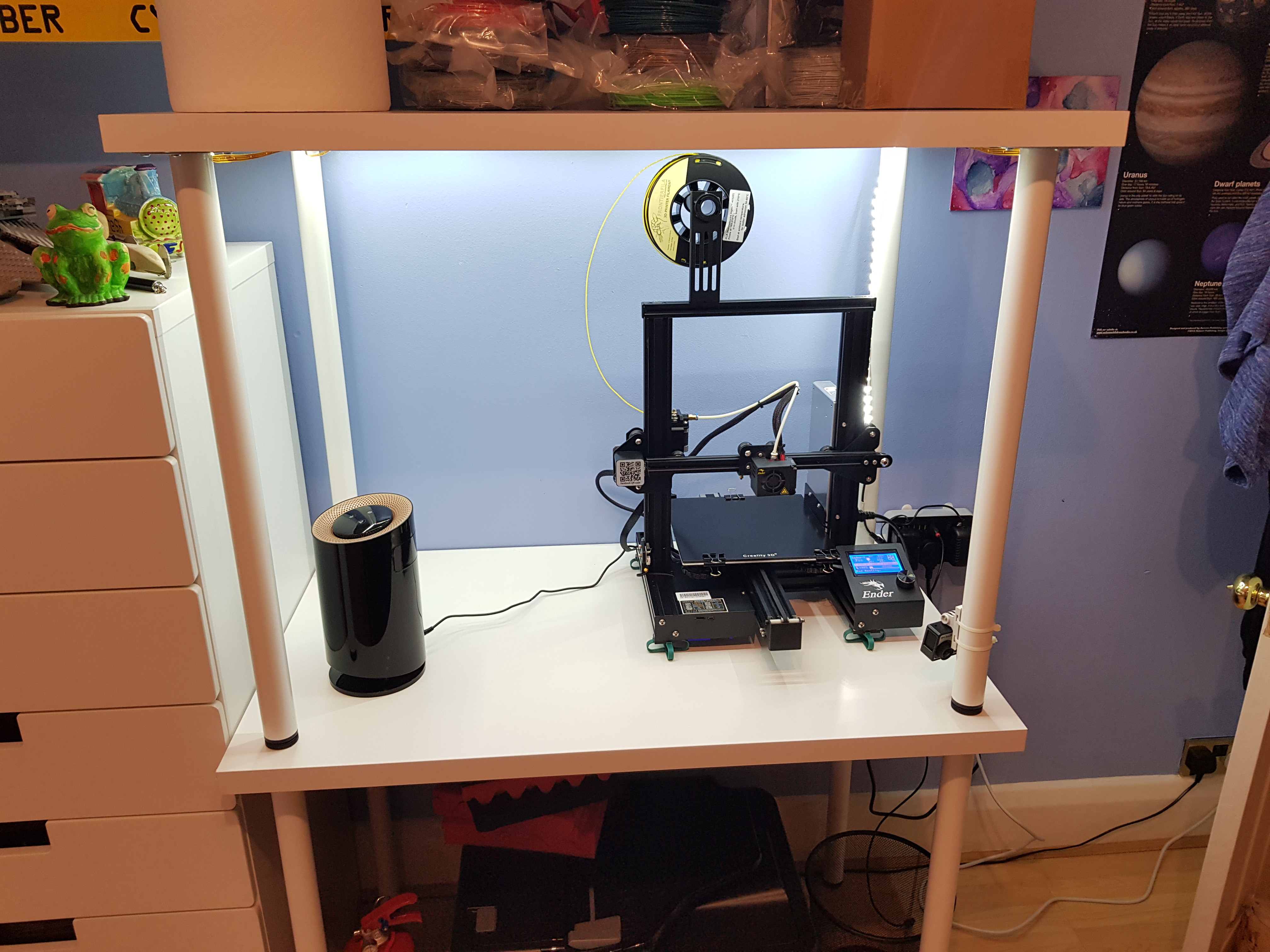 At this point, I was really happy with how the enclosure was coming along, I even added an LED strip to the top of the table so that I could film timelapses with all it's non-shadow beauty. Beginning to think about how I would attach the front two sheets to act as doors, I neededed hinges, but hinges are ugly and expensive. Was there a way I could make my own? Oh wait! I have a 3D Printer ;) Why not 3D Print hinges? Would that be possible, I did some research and found these, 3D Printable hinges that I could print-in-place without any support. Perfect! 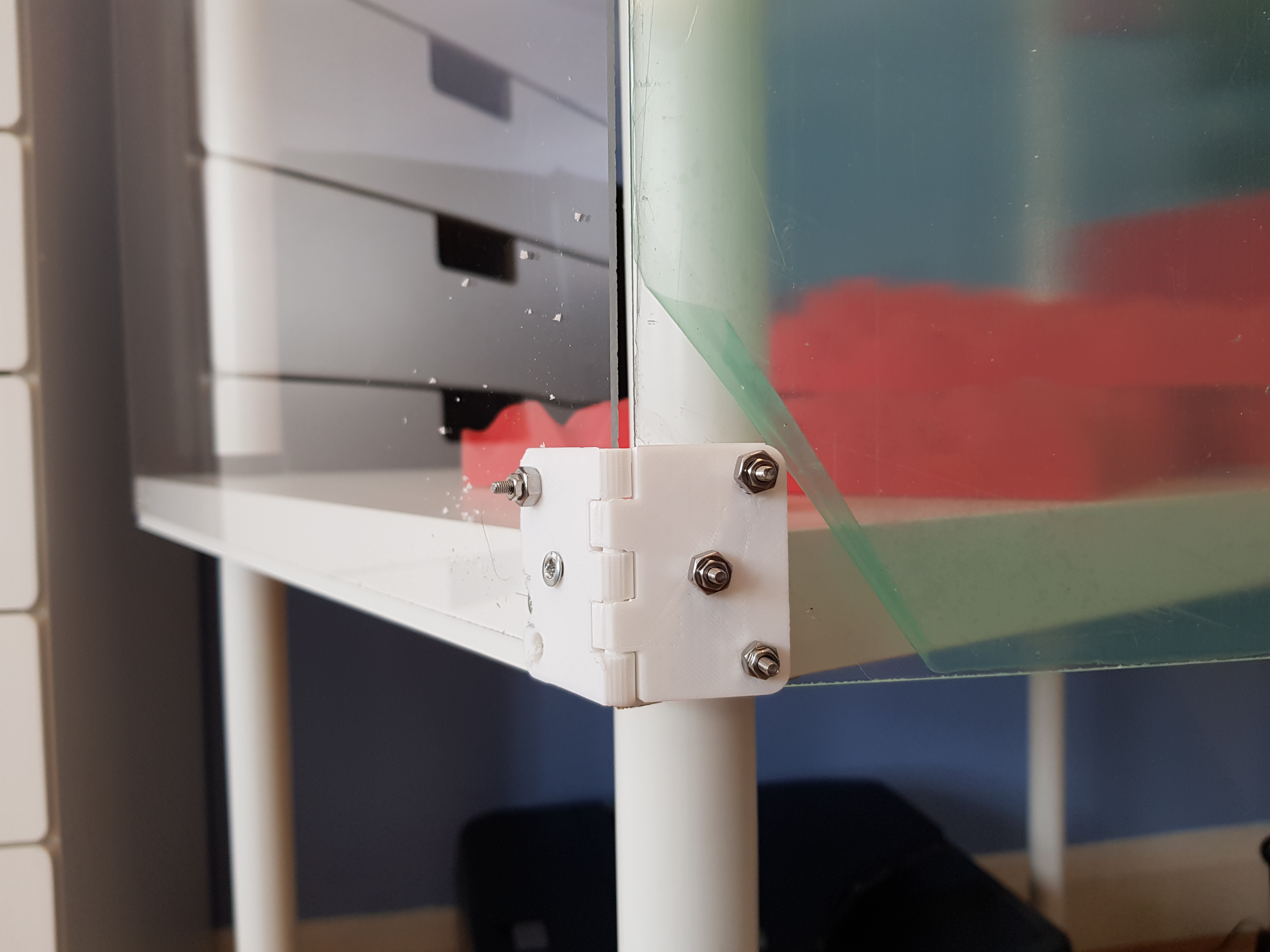 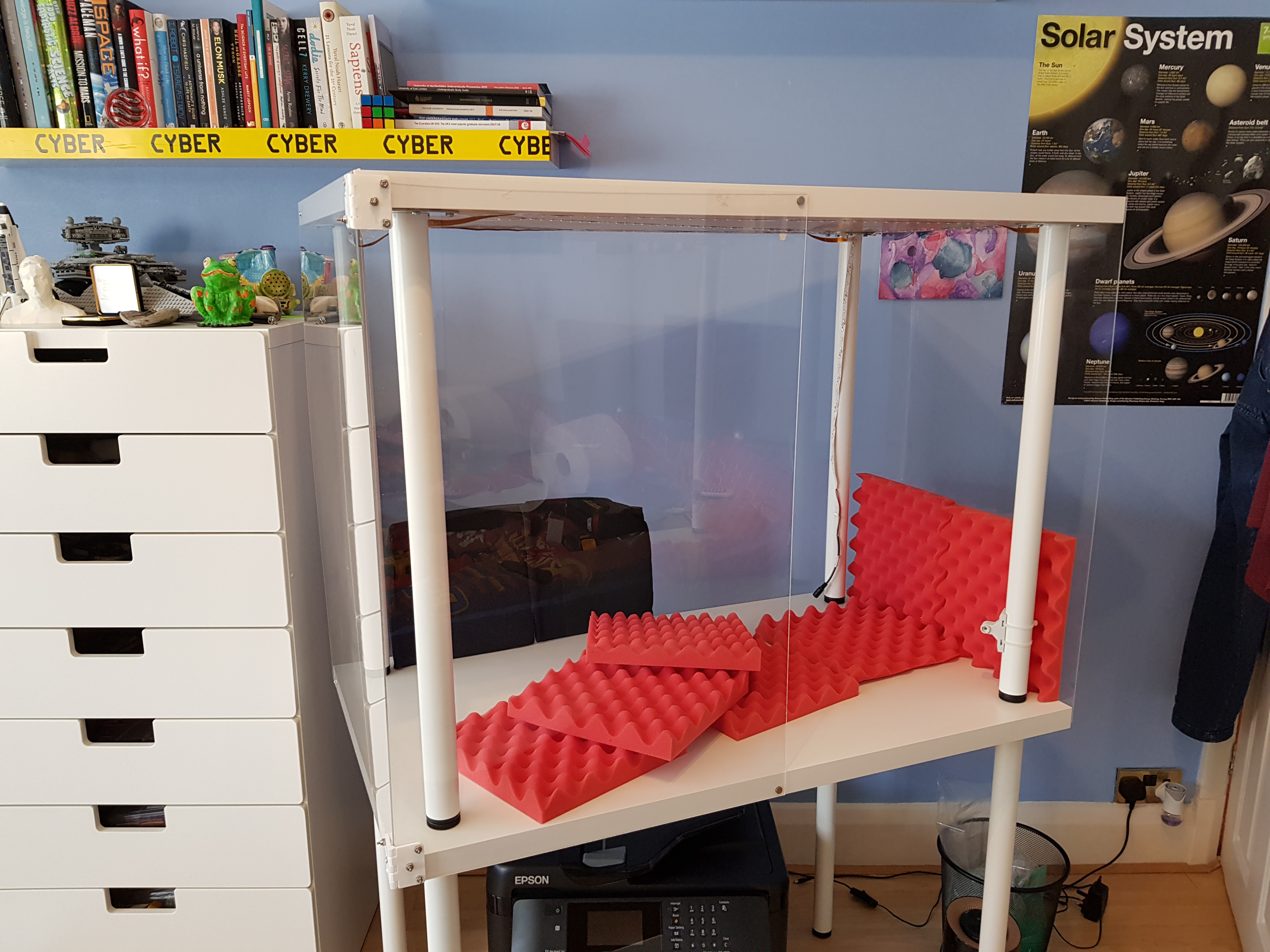 These hinges worked really well and the weight of the doors did not seem to effect the hinges at all, I did break one hinge but that was due to human error. They worked perfectly and I was able to fix the first door on. Completing the first door, I was quickly able to attach the second door. I came across a problem, the hinges would not fit flush with the table so I bought some small circular magnets and was able to add a small locking system for the acyrlic doors.

I cleaned up the tables and dismantled the sheets so that I could clean them individually before putting them back together, this helped to keep the clean, aesthetic look of the enclosure. Placing the 3D Printer back into it's place, I added sound-proof wall tiles to help with the noise reduction.

Just to see how much of a success the enclosure actually was, I wanted to check the noise reduction, so I got an app on my phone. Outisde of the enclosure the app was reading 31dB and within the enclosure it was reading 61dB. A pretty huge success! The final product is shown below with the enclosure being fully built and cleaned.

Copyright © All Rights Reserved | This template is made with by Colorlib